Today we used the Science and Engineering Practice of Asking Questions. The students first explored with marble roller coasters, and then came back together to think about what kinds of questions they could test with the marbles on the coasters. For example, they might want to know if they could change how far the marbles traveled on the coaster, or find out if one marble could knock another marble into the cup. Once they thought about the questions, they went back to their coasters to try to answer their questions by testing them out!

When the experiments were over, we talked about how the energy changed while the marbles rolled on the track, and also how the energy was transferred from one marble to another when they collided. Ask your student what happens to the kinetic energy of a rolling marble when it hits a marble that isn’t moving! 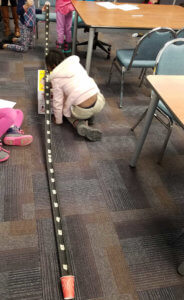 Maureen earned a Ph.D. in Chemical and Biomolecular Engineering from the University of Pennsylvania in 2003. While at Penn, she developed a novel micro-mechanical technique called micropipette peeling to investigate the role of muscle cell adhesion in normal and diseased skeletal muscle cells. After graduating, Maureen worked full time as a post-doctoral researcher and then a staff scientist a SelectX Pharmaceuticals. She joined the teaching staff in 2008 and was excited to be made an executive staff member in 2009. Maureen also continued to consult part time for SelectX until her daughter's birth in 2009; now she is focused on Science from Scientists and, of course, her children. Maureen uses her spare time to read, blog, cook, and renovate her house.

What do They do There Anyway? Get to Know Science from Scientists!
26 Jul, 2022
Science from Scientists Announces Support for Teacher Professional Development from All Points North Foundation
27 Jan, 2022
Open 7 days INFO
Our Young Pre classroom is for ages. This age group is working
BELL SCHEDULE