Resistance is not futile!

Today the scientists taught the class about Ohm’s Law, a fundamental relationship in electronics and circuitry. Georg Ohm was a German physicist in the 19th century who first discovered that voltage is directly proportional to both current and resistance or V=IR. Voltage is what pushes the electrons along through the circuit, and resistance is a property that resists the flow of electrons. So this equation is saying that the harder you push on the electrons (increase voltage), the faster they go (increased current). Alternatively, if you increase the resistance to the current, the voltage must therefore also drop.

For the activity, we built real circuits on breadboards and used them to light up red LEDs. We then experimented with resistors, and added them to the circuit in series (in a row) and in parallel (next to each other). We discovered that adding a resistor in series increases the total resistance of the circuit, but if we add a resistor in parallel, the total resistance actually decreases! Ask your student to explain why that is! 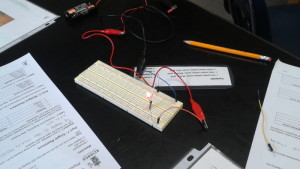 Maureen earned a Ph.D. in Chemical and Biomolecular Engineering from the University of Pennsylvania in 2003. While at Penn, she developed a novel micro-mechanical technique called micropipette peeling to investigate the role of muscle cell adhesion in normal and diseased skeletal muscle cells. After graduating, Maureen worked full time as a post-doctoral researcher and then a staff scientist a SelectX Pharmaceuticals. She joined the teaching staff in 2008 and was excited to be made an executive staff member in 2009. Maureen also continued to consult part time for SelectX until her daughter's birth in 2009; now she is focused on Science from Scientists and, of course, her children. Maureen uses her spare time to read, blog, cook, and renovate her house.

Science from Scientists Announces Support for Teacher Professional Development from All Points North Foundation
27 Jan, 2022
Science from Scientists Harnesses the Talent of Experts from the Field in a Collaborative Effort to Improve In-School STEM Education
10 Jun, 2020
Open 7 days INFO
Our Young Pre classroom is for ages. This age group is working
BELL SCHEDULE

Visit our Contact Page for a detailed listing of ways to reach us.