In this week’s lesson we learned all about cells, the microscopic units that are the building blocks of all living things. Students discussed the size of cells and investigated all the microscopic parts or “organelles” that have important jobs within each cell.  They then had a chance to show off their knowledge and build their own cell models.  Groups competed to see which team could complete their model first.   In order to earn organelles for their models, groups had to successfully answer instructors’ questions.   They then received that part or their model (eg. plastic bag for cell membrane; ping pong ball for nucleus). Their favorite parts of the model were the artificial snow that represented the cytoplasm and the miniature pigs representing lysosomes!

This was an interactive way for students to learn about and build their own cells.  For easier understanding, every part of the cell was related to things you would find in a city (eg. nucleus was city hall as it is the “planner” of the cell and mitochondria are the power plants).  By the end of the lesson, everybody had a complete cell model, and a better understanding of the inner workings of the cell! 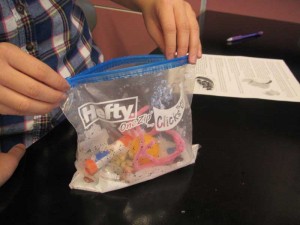 Assembling the cell model with all the organelles.

(Recent Comments)*
28 Sep, 2099
Science from Scientists Harnesses the Talent of Experts from the Field in a Collaborative Effort to Improve In-School STEM Education
10 Jun, 2020
Open 7 days INFO
Our Young Pre classroom is for ages. This age group is working
BELL SCHEDULE

Visit our Contact Page for a detailed listing of ways to reach us.