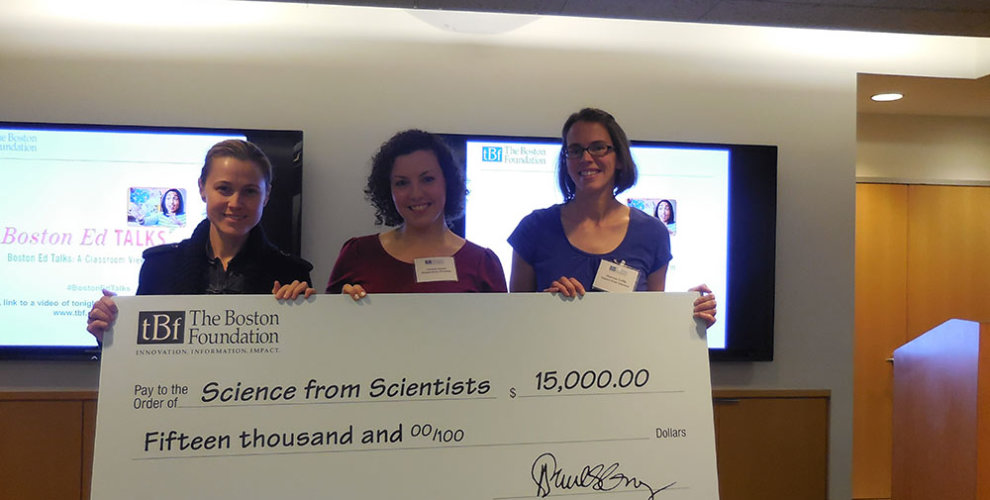 According to Dr. Angle, the grant will be used to expand Science from Scientists’ award-winning In-School Module-based Science, Technology, Engineering, and Math (STEM) program to a new Boston public, Catholic, or charter school on our waitlist for the 2014-2015 academic year.

“This year our organization is providing curriculum-based, hands-on STEM lessons taught by real, charismatic scientists to over 3,000 4th-8th graders in 25 partner schools in Greater Boston. With our demonstrated ability to increase MCAS scores by 23% and our recent @Scale Endorsement from the state of Massachusetts for being one of the top five most effective STEM organizations raising student interest and achievement in science and technology, the number of schools requesting our support has grown very quickly, necessitating a waitlist” Dr. Angle said.

The grant was awarded by the Boston Foundation’s Teacher Advisory Board. The Teacher Advisory Board consists of 30 teachers from the Boston area and was established to provide feedback on the Boston Foundation’s education strategies in regards to programs, initiatives, and research. Science from Scientists was one of many candidate organizations nominated and ultimately voted on by the board. “We are honored that classroom teachers have selected Science from Scientists to be the recipient of this grant. It helps to reinforce the value that our program provides to both support student learning and competency in STEM, as well as professional development (PD) for classroom teachers through our PD program.”

About Science from Scientists

About the Boston Foundation

The Boston Foundation, Greater Boston’s community foundation, is one of the oldest and largest community foundations in the nation, with assets of nearly $900 million.  In 2013, the Foundation and its donors made nearly $98 million in grants to nonprofit organizations and received gifts of $130 million.  The Foundation is a partner in philanthropy, with some 1,000 separate charitable funds established by donors either for the general benefit of the community or for special purposes.  The Boston Foundation also serves as a major civic leader, provider of information, convener, and sponsor of special initiatives that address the region’s most pressing challenges. For more information about the Boston Foundation and TPI, visit our website, www.tbf.org or call 617-338-1700.

SfS at TouchTommorrow Event at WPI

What do They do There Anyway? Get to Know Science from Scientists!
26 Jul, 2022
Science from Scientists Announces Support for Teacher Professional Development from All Points North Foundation
27 Jan, 2022
Open 7 days INFO
Our Young Pre classroom is for ages. This age group is working
BELL SCHEDULE